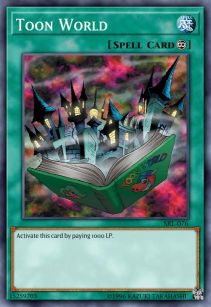 Toon decks rely on Toon World to activate the various Toon monsters available in the format. Toon Table of Contents searched for World, or any of the cartoon beaters. From there, the Toon player has a choice of using the toon monsters to attack the opponent directly, or to destroy enemy monsters. Should they attack directly, Toon Gemini Elf and Toon Masked Sorcerer each give a "plus one" in terms of card advantage, either by discarding an opponent's card, or drawing a new one respectively.

Because the higher level toon monsters are not tribute summoned, but special summoned, they can be fueled by Scapegoat tokens. It is for this reason that many Toon decks play a high number of tribute monsters along with Scapegoat. As such, cards which pair well with the quickplay spell , like Creature Swap, Enemy Controller, and Metamorphosis, all show up from time to time.

Protecting Toon World is essential, as its destruction results in the simultaneous destruction of all toons in play. While commonly used as protection in other decks, Solemn Judgement is not ideal because of the dramatic life loss. The cost of toon attacks and activation of Toon World would simply be unrealistic with Judgement added into the picture. This is made worse by the popularity of Skill Drain as an inclusion in the deck. Instead, Magic Reflector is played to keep Toon World around. Nimble Momanga is a popular method of life gain, as its status as a recruiter also help keep pressure and feed tribute summons.

The previously mentioned Momonga keeps life points high, monsters on board, and feeds high level toons. Spy is included for all of the same reasons. The primary Toons of choice here re Toon Gemini Elf for its high attack and discard effect, and Toon Summoned Skull, which is the easiest of the bigger toons to summon.

Reflector keeps Toon World active, and Metamorphosis (Meta) turns goats into Thousand Eyes Restrict, which can suck up an opposing monster and then become fodder for a tribute summon later on. Toon Summoned Skull and Blue-Eyes Toon Dragon are both respectable Meta targets as well.

The high number of essential spell cards greatly reduces the trap count of the deck. So, Royal Decree fits in well without disrupting the deck's own strategy. The Continuous trap protects toons from trap-based removal as they bypass enemy blockers and attack the opponent directly. 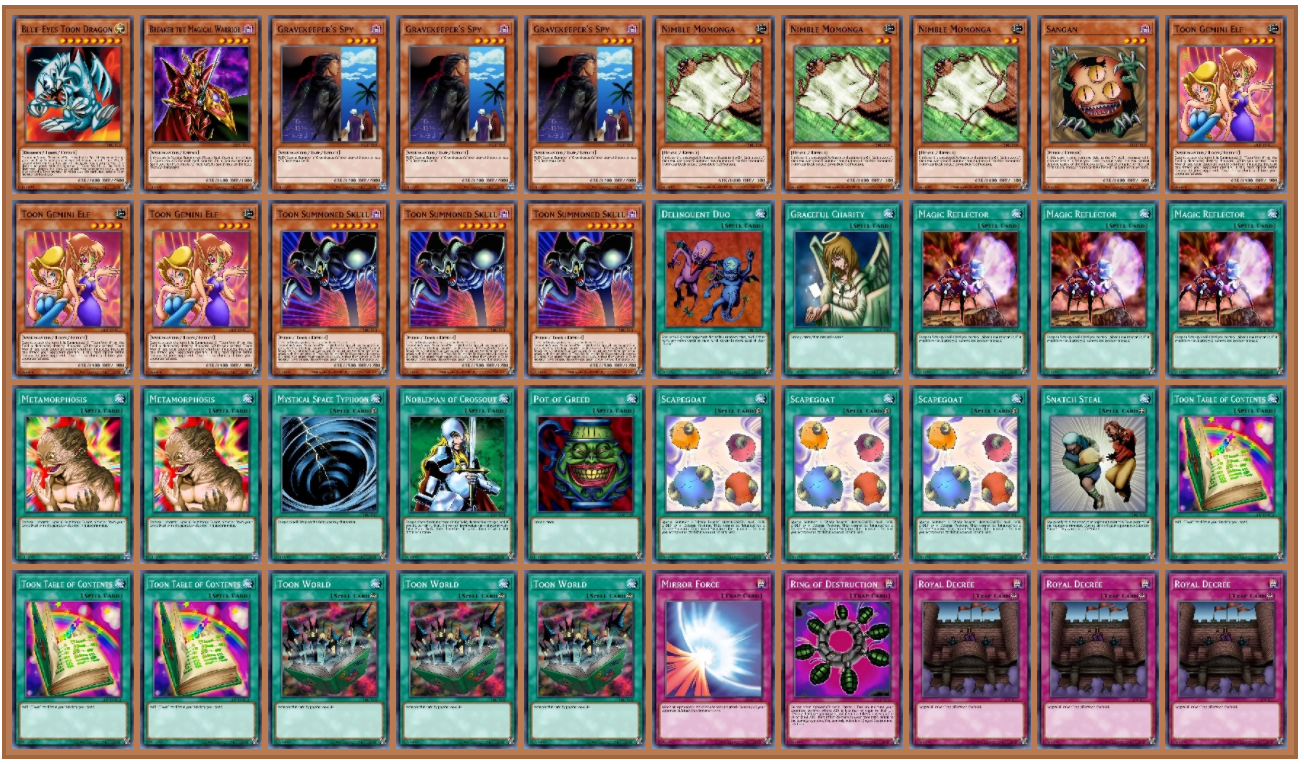 There are a wide range of play styles available to a Toon player. Lower-leveled toons can be paired with cards like Messenger of Peace​ (protected by Magic Reflector) or the Spirit Barrier + Toon Defense combo, turning the deck into a strange lockdown/aggro deck hybrid. Some versions rely heavily on Skill Drain, pairing it with Toon Goblin Attack Force and his non-toon cousin. Others still, opt for an Abyss Soldier package, noting the synergy it has with Toon Mermaid (searched for with Table of Contents) and Salvage.

Lists with a higher-than-normal star count on their monsters will often play Brain Control and Soul Exchange to make their summons that much easier. Exchange specifically is interesting, as the drawback of not being able to attack with the monster in the same turn is superfluous, since this drawback already exists on every toon monster.

Because toons cannot attack the turn they come into play, Vengeful Bog Spirit is sometimes included to even the playing field. Both it and Wave-Motion Cannon take counters from Reflector well.

​Because Toon World only destroys toon monsters when it itself is destroyed, some players will opt to play Giant Trunade to return it to their hand and protect their threats. Abyss Soldier has the same potential, and both keep enemy battle traps off the field, too.