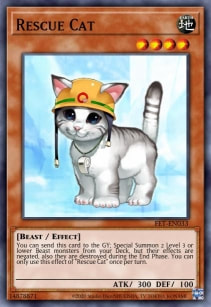 Rescue Cat is an OTK combo deck that combines its eponymous beast monster with Last Will to create a lethal board of monsters. Typically, the Rescue Cat player will activate Last Will, then summon and activate Rescue Cat. Cat's effect will search out two Milus Radiant, while Last Will finds another copy of Cat. This second cat will then be tributed to find the final Milus Radiant and either Gyaku-Gire Panda or Des Wombat. The Panda board results in 7700 damage against an empty field, while the Wombat board hits for 8500.

In the event that the Cat player cannot kill the opponent in one swing, burn effects will be used to close out the game. The most common are Ring of Destruction, Ceasefire, and Magic Cylinder. Just Desserts and Secret Barrel also see play. Cards like Mage Power, United We Stand, and Gaia Power are also used to improve attacker's damage output and make an OTK more likely.

This is a typical Rescue Cat list. Giant Rat is used here to effectively search out Rescue Cat for consistency. Should it be necessary, Injection Fairy Lily and Exiled Force are additional search target, with Force being a great way to trigger Last Will. Both Jars also help to draw into the combo.

​Giant Trunade keeps backrow from ruining an otherwise game-winning turn and is considered staple of the strategy by most. 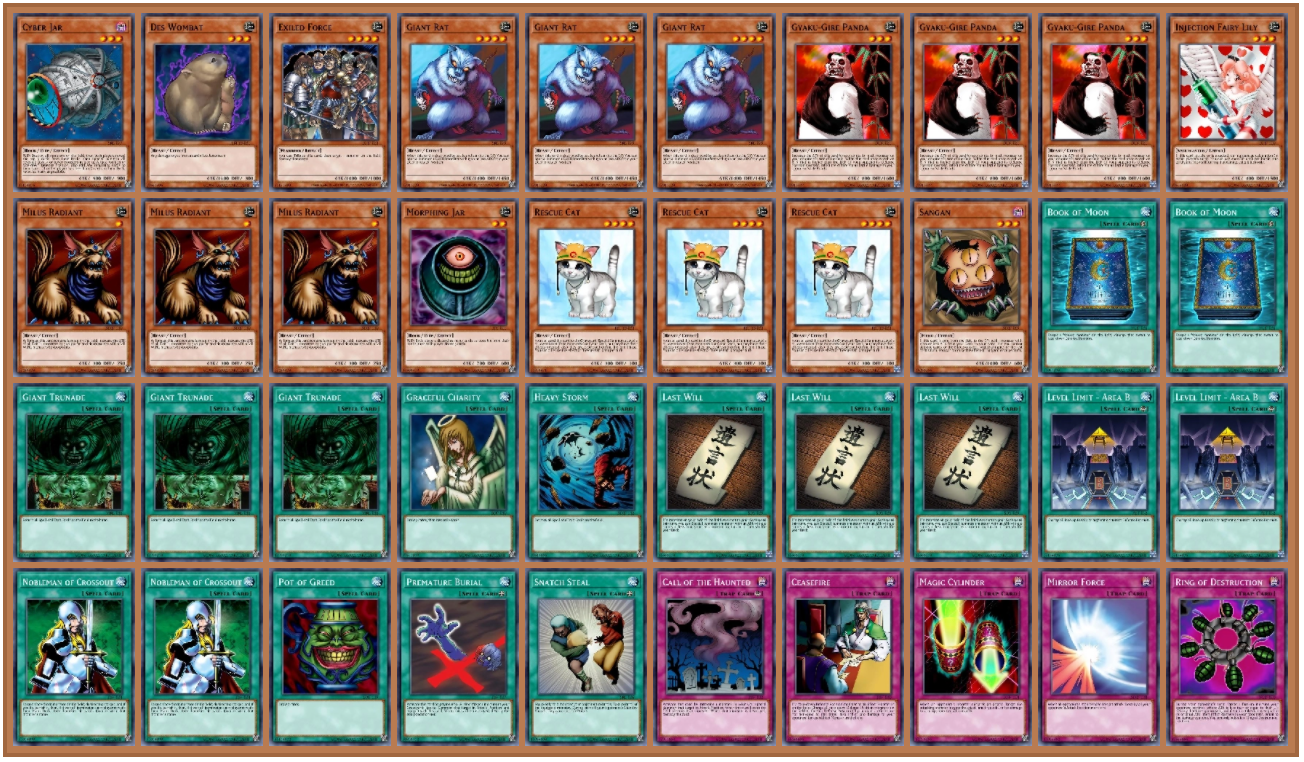 The high Earth monster count allows for Gigantes to be played, resulting in an even more explosive version of the deck. The Rock giant loves to feed off of tributed cats and helps to ensure a kill. If sticking to a beast-heavy list, The Big March of Animals​ could serve the same purpose by raising your monster's ATK similarly to Gaia Power. While similar to each other, March does have benefits over Power. Its status as a quickplay spell means cards like Dust Tornado and Mystical Space Typhoon are not relevant. It can also be played during the battle phase, surprising opponents who may otherwise have thought themselves safe.

Royal Decree can act as an alternative to Giant Trunade, or be played alongside it. Should one find opposing monsters too much to deal with, Lightning Vortex could be included to wipe them away.