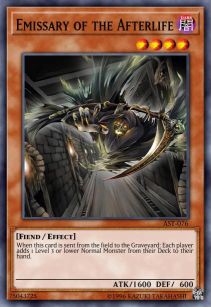 Emissary Aggro takes advantage of Emissary of the Afterlife's respectable stats and search effect to gain card advantage while staying aggressive. The idea is to force the opponent into making difficult decisions on how to use their removal and battle traps. In most cases, spending a card to destroy Emissary will result in a net loss of card advantage over the Emissary player. Twin-Headed Behemoth is also played for the same reasons.

Sonic Duck is the search target of choice, as it has the highest attack of any three-star monster in the format. Giant Soldier of Stone's 2000 DEF makes him a common target for players looking to stall enemy agrro decks. Normal monster support cards, like Dark Factory of Mass Production, are sometimes used as well.

Emissary and Twin-Head are both excellent tribute fodder. Because of this, Mobius the Frost Monarch is often included in Emissary Aggro lists. Mobius clears the path for easy aggression, and acts as another cog in the card advantage machine.

A typical aggro monster package of Abyss Soldier and Kycoo the Ghost destroyer are played alongside the Emissary cards here. With these monsters, the pilot has main-deck answers to most problems it might come up against. Kycoo deals with Chaos, Ducks runs under Gravity Bind and Level Limit, and Mobius and Abyss answer more general issues.

A full aggressive backrow is played as well. Three Saku and Dustshoot apiece keep the opposing monster count low so that you can swing in directly, and Solemn stops any defenses the enemy might try to put up. 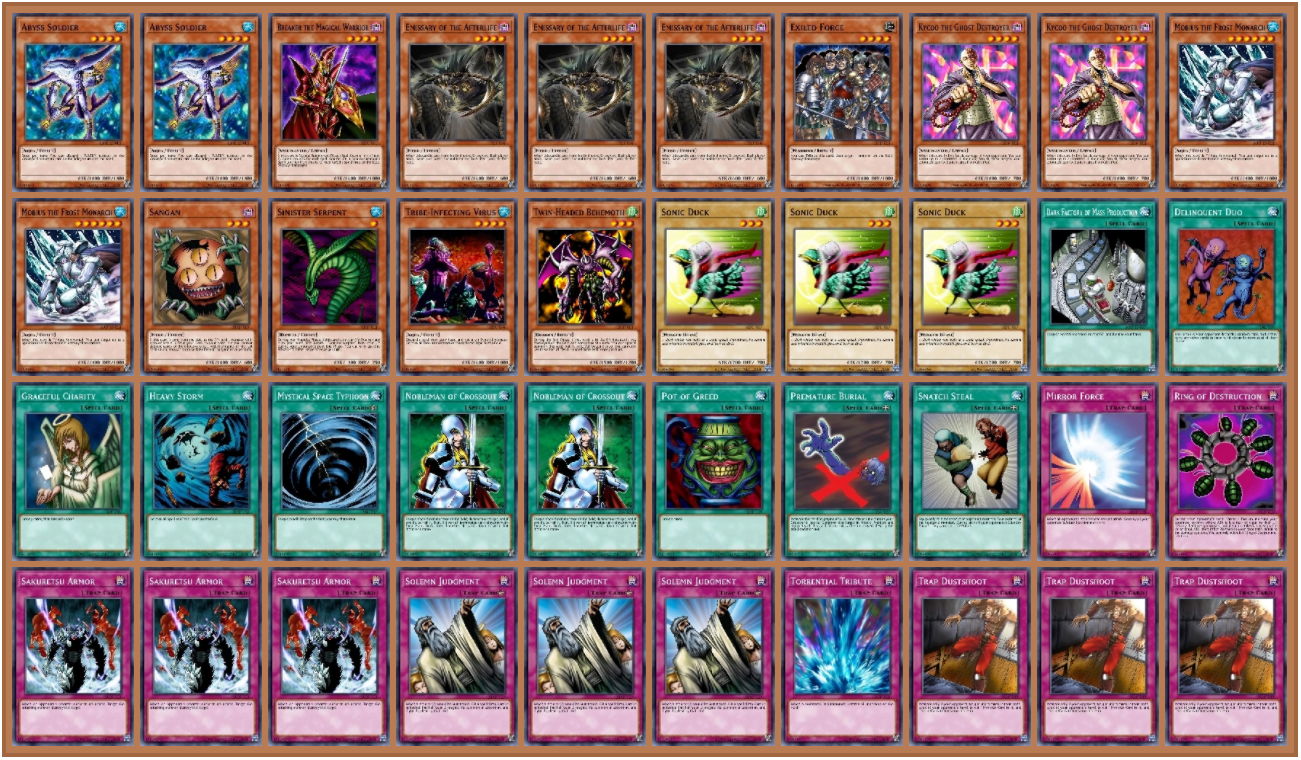 Emissary's search effect makes it easy to find Light and Dark monsters to fuel Chaos summons. Dragon Zombie's 1600 ATK is respectable, and Bio Mage has the highest ATK of any Light three-star found by Emissary. Similar to the main list, Emissary's effect allows for more liberal use of tribute monsters, which justifies Jinzo's inclusion here. 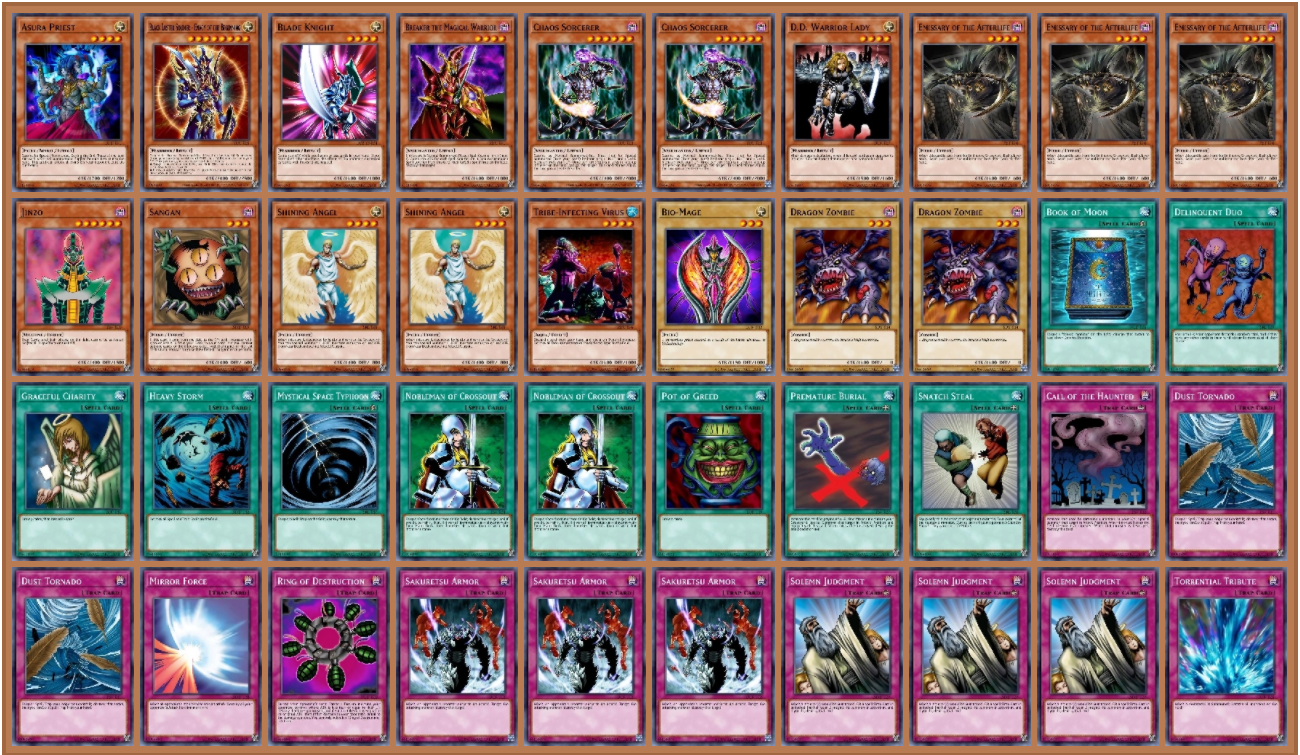 Enchanting Mermaid is the Emissary target of choice for Water Emissary Aggro. She makes great Abyss Soldier fodder without having to worry about a loss in card advantage, and her attack is high enough to pose a decent clock as long as the way is clear.

Salvage bring the mermaid back for additional aggro plays and Abyss discards. It can also be used to refuel the hand after a Phoenix Wing Wind Blast. 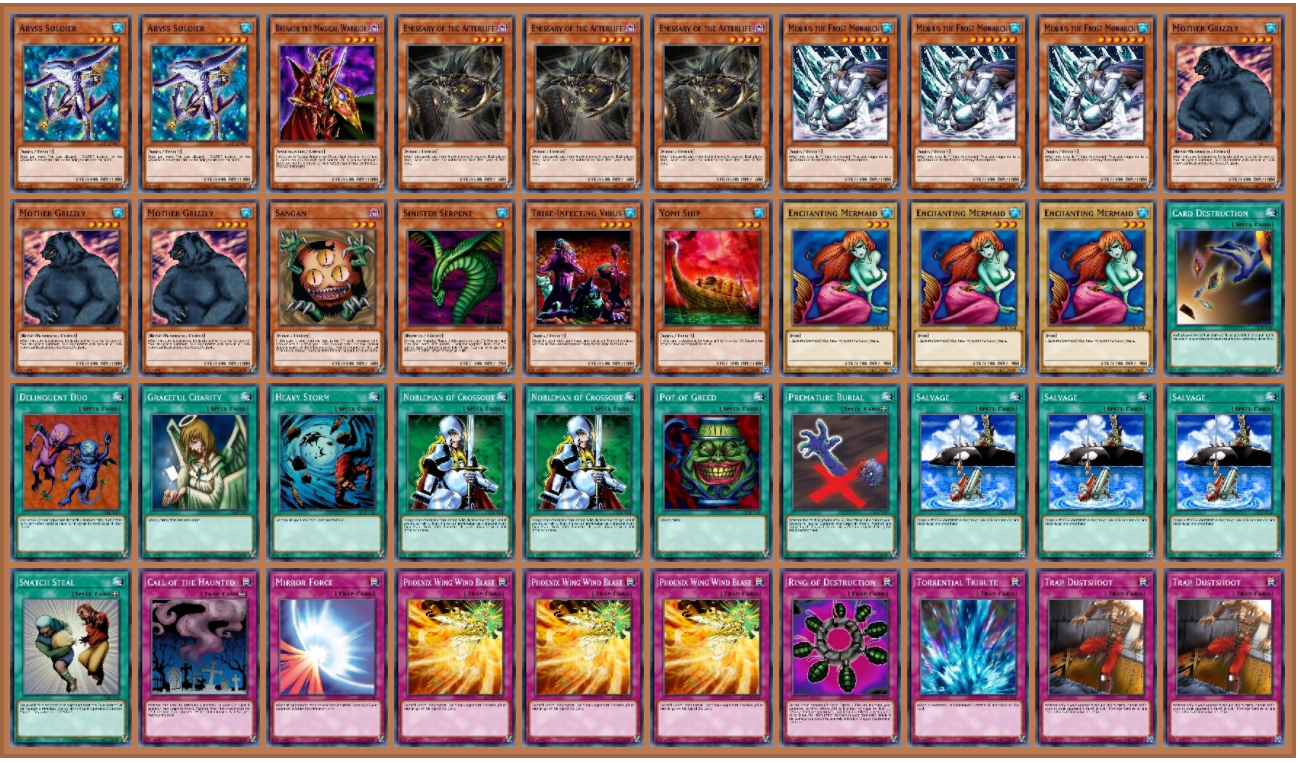 D.D. Trainer and Oppressed People are both viable Metamorphosis targets. The resultant Thousand Eyes Restrict can then be tribute to a Mobius when appropriate. Oppressed People also discards to Abyss Soldier's Effect, and with 2000 DEF it sticks around easy enough to tribute as well.

Any Monarch can be played, should one desire, though Mobius gives the most in terms of how many cards it gets rid of.

Because the core monsters used in the deck are either vanilla attackers, or work regardless, Skill Drain is a popular inclusion in the deck.