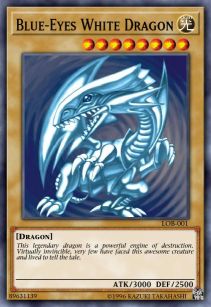 True to its name, Blue Eyes White Dragon summons its eponymous and iconic monster, then rides the dragon to victory. Usually, Kaibaman is the special summon method of choice, as the warrior is easily searched for using both Reinforcement of the Army (RotA) or Shining Angel. The deck can go all in on this interaction, or pair it with other summon methods. Kaiser Sea Horse, as an example, is sometimes used, but the most powerful is likely Fusilier Dragon, the Dual Mode Beast combined with Metamorphosis (Meta). Transforming the machine into King Dragun both summons and protects Blue Eyes, a deadly board state for any deck to face. Such versions usually opt for more dragons and dragon support cards so as to make the most of Dragun.

​Burst Stream of Destruction is a flashy way to bring Raigeki back from the banned list, though it is situational, and therefore not always used.

Due to the all-in nature of the deck, protection is a must. Beyond King Dragun, players will often bring along Solemn Judgement, My Body As a Shield, and other spells or traps to ensure Blue-Eyes' survival.

A Fusilier/Meta list which maximizes consistency over other options. With both Shining Angel and RotA searching for Kaibaman, and a set of three Fusiliers, Blue Eyes is rarely a dead draw. Each card can also toolbox for powerful answers like D.D. Warrior Lady and Exiled Force. Playing Fusilier brings the added benefit of having enough Dark monsters to Justify Black Luster Soldier's inclusion.

Mirage Dragon is another failsafe which both prevents battle traps from being an issue, while also being a dragon to be summoned off of King Dragun. 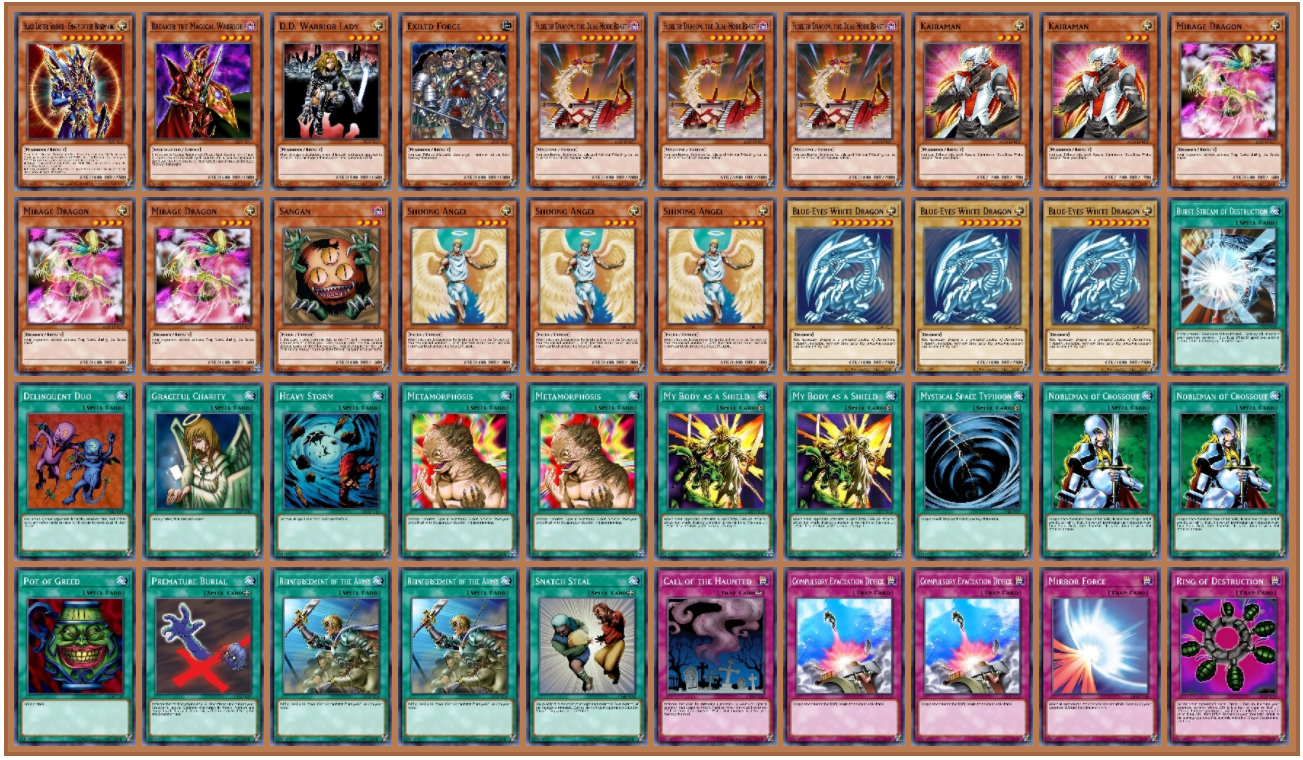 Lists which focus on the dragon theme will sometimes play Element Dragon, which can be searched out using Shining Angel or Masked Dragon. If Luster Dragon is included, it can help activate Element Dragon's combat effect. Dragon's Rage can help deal with Scapegoat, and A Wingbeat of Giant Dragon pairs well with King Dragun. Return a Blue Eyes to destroy all backrow cards, then special summon it back to the field for free. The most powerful of the dragon support cards, and the primary reason to play a high number of the monster type, is Stamping Destruction. Easy spell and trap destruction that comes with the bonus of dealing extra damage is a powerful effect that fits in incredibly well with the strategy.

Because recruiters are common, so too is Creature Swap, which can also be used on extra Kaibaman, or Scapegoat tokens if the Blue Eyes player decided to play it alongside Meta.

​With Exiled being played alongside Kaibaman and Meta, Last Will is easily abused, either special summoning even more threats, or searching out an effect monster to clear the way. Plays like this often result in massive damage swings, sometimes ending the game.